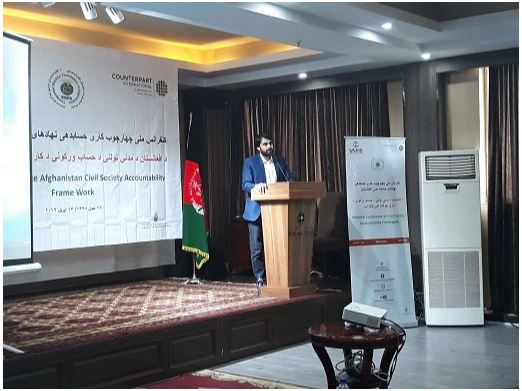 ACBAR, PATHO, AELSO and ACSFo received an award for being the most transparent and accountable entities in Afghanistan at the national conference “Civil Society Accountability Framework” hosted by Transparent Election Foundation of Afghanistan (TEFA) on 16 April. ACBAR’s deputy director Mr. Tamim Sabri accepted this honor and said “ACBAR will stay committed to the NGO Code of Conduct.

On 19 August World Humanitarian Day we like to honor female humanitarian workers for the risks they take and the service they give. We call on all our members to send in stories of women as first responders during the darkest hours of crisis. Their stories should become stark reminders of the cost of war and the resilience of humanity. All stories will be compiled and rolled out as a campaign within Afghanistan. Also we will send in to the United Nations. Click for background and guidelines. Send your stories to civilsocietyofficer@acbar.org before Monday 5 August.

SCA, NAC, HI with coordination of ACBAR has organized a donor round table to discuss with donors the recommendations regarding physical rehabilitation of persons with disabilities on social inclusion and policy gaps. Read more

NRC's briefing paper is on the recent movement of families from displacement sites in Qala-e-Naw (Badghis) including recommendations. Read more

United State Institute of Peace (USIP) special report examines perspectives on peace and reconciliation among people living in areas of Afghanistan where the Taliban have significant influence or control. Read more

United Nations - Economic and Social Commotion of Asia and Pacific (UN-ESCAP) published the Sustainable Development Goals (SDGs ) progress in Asia report 2019. Their clear message is that the process for achieving in 2030 the SDGs should be accelerated. Read more

SCI advocates with this report for more child protection because around 420 million children are living in conflict zones and the amount is growing. Read here

In March ACBAR participated at the ICVA General Assembly meeting. The focus was on improving the humanitarian system with grassroots engagement. Read more